Steel 21 Is ’Burning’ into the Future 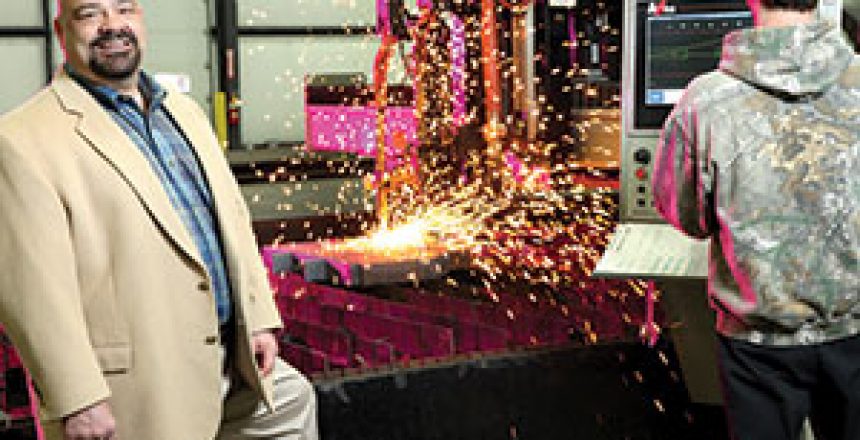 Kimm Slater, above, is counting on advanced technology for cutting steel plate to propel Steel 21 toward a bright future. Photo by Mike Buck

The “21” in Steel 21 stands for the 21st century, and if its first two months in business have been any indication, it’s going to be a very busy century for the people at Steel 21.

Steel 21 is an Algoma Township company supplying steel plate to industry. The 30,000-square-foot plant opened its doors in early February this year and now has 22 people employed on two shifts, often six days a week, according to Kimm Slater, founder, owner and president.

“Our slogan is ‘burning into the future,’” said Slater, and the small company’s big investment in advanced technology is aimed to do just that.

“Burning” is a steel industry term for cutting heavy steel plate into shapes and sizes for stamping dies used by stampers and tool-and-die companies. The dies and molds are used by manufacturing companies that make everything from steel automobile parts to plastic injection-molded toys.

“Burning” steel plate is no cinch. The sheets of steel are at least three-quarters of an inch thick, but can be as much as 13 inches thick. At Steel 21, the standard sheet of steel plate is 6 inches thick and weighs almost 40,000 pounds, according to Slater.

Weight is an issue because the plates have to be “flipped” repeatedly by machinery in some of the processes entailed in preparing them for use.

The industry has two ways to cut heavy steel plate. One is “oxy fuel,” a mix of oxygen and natural gas used in a cutting torch. The other is plasma, in which a gas is blown at high speed out the nozzle of a cutting torch, with an electrical arc in the middle of it from the nozzle to the plate surface. Plasma can cut about three times faster than oxy fuel.

“We have the latest in plasma technology,” said Slater. The company invested in a new plasma machine rated at 400 amps, with the power to cut through 3-inch plates at a rate of 40 inches per minute.

Another technological advancement Slater is particularly proud of is the Steel 21 process for making plates flat and parallel without the use of grinders.

“Parallel” is an industry term that means the thickness of the plate will be absolutely uniform throughout — sometimes down to a thousandth of an inch. The use of grinders to achieve parallel is “a slow, tedious process,” he said, and very messy. It also requires flipping the sheet as many as three or four times because the grinding heats the steel, causing it to warp if it isn’t flipped periodically to grind the other side.

Slater can’t reveal his proprietary process, but it requires only one flip of the steel. He worked with an Italian company and later an American company in designing and building the machines he uses.

“Nobody else is doing anything like this,” he said, but his decision to try it was “a roll of the dice” because if it had not worked as intended — to provide Steel 21 with a productivity advantage — the significant investment in the new technology would have been a serious waste of money.

Slater also has a patent pending on a self-leveling system for another part of the process of making the plate flat and parallel. It’s complicated, to say the least.

He said he has invested about $2.5 million or more in technology. According to The Right Place Inc. in a news release it issued last spring, Slater is planning to invest $4.5 million in his new steel plant, with a start-up plan that could require up to 90 employees within three years.

One year ago, the Algoma Township Board approved a tax abatement for the Steel 21 plant as an incentive to locate there. Construction on the factory started in June 2014.

The plant went into production in early February so he can’t yet be sure what his sales will be, but he guesses they could go as high as $5 million to $6 million in the first year.

Slater, 51, was born and raised in Rockford, and his entire career has been in the steel industry. His father started Maco Steel in Belmont, which Slater took over in 1987. In 2006, he sold the business and made his first half-hearted attempt at retirement. It didn’t last long: In 2008, he started Steel Craft Technologies.

“That business grew very quickly,” said Slater. It started with three employees, and when he sold it in 2012, it had nearly 90 employees. That was during the Great Recession, and it is still in business today.

“I’m not a retirement guy,” Slater acknowledged. He did volunteer work for a couple of years, but came to the conclusion that “I’m better suited to earning money,” which he then can share with nonprofit organizations doing work he values.

As members of the tool-and-die industry know well, the 50 percent cut in U.S. auto production during the recession was a very challenging period in U.S. industrial history. Slater said that “tough period” eliminated the less efficient and less effective suppliers in the auto industry.

“The lower level just disappeared,” he said. “What’s left is the cream of the crop.”

Now that U.S. industry is coming back strong and order volumes are high, there aren’t enough employees and machines among its suppliers to meet demand. Now many companies like Steel 21 are working six or seven days a week.

Advances in technology also have added to the pressure because, theoretically, a company can do far more today, and that is what customers have come to expect. For example, Slater said that 20 years ago it took several months to produce stamping dies. Now an order may be completed within a couple of weeks.

“The technology —in particular the computer and the die simulators — make a big difference,” he said.

The heavy industrial manufacturing arena in the United States is “a real good rollercoaster ride is how I put it. You’re either going up or you’re going down, and very rarely are you riding level.”

His philosophy is that a business is either growing or it’s dying. He tells his employees that when it comes to investment and equipment, and business in general, a business can’t be allowed to stagnate, “or the world will pass you by. You really have to stay on the cutting edge with your investment.”

The United States, in Slater’s opinion, is still on the cutting edge in industrial technology in some areas.

“Not all areas,” he added. “What I’m seeing now is people finally starting to make the investment in some of this technology.”

NextWhat’s Going on at Steel 21?Next